We recently learned that Alec Baldwin is being charged with involuntary manslaughter for his accidental shooting on a movie set. I don’t know the details of the case, nor the intricacies of the law, but I have a question about movie props.

Why was an actual gun used on the set? And why were actual bullets used on the set? Why wasn’t it a fake gun: plastic, or metal without a working barrel? Why does it have to fire blanks? Why can’t everyone just pretend, and let someone add the bang and the muzzle flash in post-production?

Movies are filled with fakery. The light sabers in Star Wars weren’t real; the lighting effects and “wooj-wooj” noises were add afterwards. The phasers in Star Trek weren’t real either. Jar Jar Binks was 100% computer generated. So were a gazillion “props” from the Harry Potter movies. Even regular, non-SF non-magical movies have special effects. They’re easy.

Why are guns different?

Why Are Toy Commercials Still Like This? by Stéphanie Thomson
Wednesday January 25th, 2023 at 9:50 AM

Best of The Atlantic

Last month, I ran a tiny media experiment in my own home: I recorded all of the toy commercials that my 3-year-old daughter watched in a one-week period, looking for patterns in how she was being advertised to. What I saw in those 28 ads was like something dreamed up in a Mad Men–era boardroom: girls preparing plastic food, boys gripping monster-themed action figures. Researchers told me that such gendered toy marketing shapes how kids play—and what they learn.

Across the roughly eight hours of content we watched together—all of it Nickelodeon programs aimed at kids 2 and older—68 percent of the toy commercials foregrounded either only girls or only boys playing with the product. The all-girl commercials tended to use pastel colors, or pinks and purples; they mostly advertised dolls and plush toys, and products related to beauty and fashion. The all-boy commercials, in contrast, drew on colors such as yellow, green, red, and blue. Many of them promoted toys based on characters from video games—a Mario action figure, for instance, was tasked with rescuing Princess Peach—or toys related to transportation or adventure.

About 32 percent of the ads featured both boys and girls, but even some of those relied on lazy gender stereotypes. One advertisement for a kids’ camera showed boys playing with a blue version and girls playing with a pink one.

This clear gender divide doesn’t reflect how my daughter actually likes to play. Her Christmas gifts included a pop-up soccer goal, a Spider-Man costume, and a purple, sparkly unicorn dress—and she loved all of them. Rather than limiting her to conventional “girls’ toys”—baby dolls, pink play ovens, tea sets—my husband and I let her form her own tastes. This isn’t a heroic or even unusual stance: In one 2017 Pew Research poll, 76 percent of respondents said it’s a good thing for parents to encourage their daughters to play with toys associated with boys; 64 percent said the same about encouraging boys to play with toys associated with girls. But toy companies apparently haven’t gotten the memo.

Admittedly, my analysis isn’t very scientific; it only shows what one toddler saw in a given week. And it doesn’t take into account the chaotic advertising environment where many kids now watch programming—YouTube. In some ways, toy marketing is less gendered now than in the past: Big-box retailers such as Target are doing away with pink and blue toy aisles, and brands such as Disney no longer explicitly categorize their products as “for girls” or “for boys.” But researchers told me that many toys are still packaged and marketed using implicitly gendered cues—and kids still pick up on those associations. Lisa Dinella, a psychology professor at Monmouth University who researches toys and gender, puts it this way: “If a kid watches a commercial where a little girl is nurturing a doll and there’s not a boy to be seen, that’s sending them the message that this toy is for girls.”

I certainly don’t mind my daughter playing with toys that are stereotypically associated with girls; I wouldn’t want to overcorrect and deprive her of the fun and learning those toys offer. But I hope that when she uses them, it’s not at the expense of all other toys. Really, I just want her to be able to decide how she plays without excessive influence. I want that for all kids.

After all, decades of early-childhood-development research have shown that a toy isn’t simply a toy. “Play leads to learning, and learning leads to life choices,” Dinella told me. So when entire categories of toys feel off-limits to kids of a particular gender, they are denied the developmental opportunities those toys provide. Boys, for example, are more likely than girls to play with building blocks and puzzles—and research suggests that that kind of play might be linked to gender differences in spatial abilities. Girls, for their part, are more likely to play with toys such as dolls, which may be associated with social skills like comforting—skills that most parents want to foster in their children, regardless of their gender.

Christia Spears Brown, a psychologist at the University of Kentucky who studies how children learn stereotypes, points out that the toys themselves aren’t inherently gendered. Marketing them in a gendered way, though, is an effective strategy for toy brands. For one thing, it allows them to create slightly different versions of what is essentially the same toy. Take that camera sold in blue and pink: If you have a son and a daughter, you might feel that you’re on the hook to buy one of each rather than a single one for them to share. That’s a common tactic, Brown told me. And more broadly, advertising campaigns tend to be successful when they target highly specific audiences.

That’s the crux of the issue: It doesn’t really matter what parents say they want for their kids, or what research tells us might be best for them. “The goal of toy manufacturers isn’t to promote healthy child development; their goal is to sell products,” Susan Linn, a psychologist and the founder of Fairplay, a nonprofit advocating against advertising directed at children, told me. “Companies gender-stereotype because it’s lucrative.”

What’s a parent to do in response to a multibillion-dollar toy industry? Stopping kids from seeing gendered commercials feels like swimming against the tide. Rather than trying to censor the content, Brown thinks we’d be better off educating our kids. “Instead of giving them blinders, give them a shield,” she told me, “so that they can interpret it as a stereotyped message instead of interpreting it as ‘Oh, this is the way things are supposed to be.’”

Even parents of very young children can use that approach. I told Brown about one particularly irksome commercial for a toy nail salon that featured tween girls in pink and sequins. Just a few weeks before we watched it, my nephew had proudly showed his multicolored nails to my daughter. Now, I wondered, would she think nail-painting wasn’t for him? She’s at a formative age, just starting to pick up on the concept of gender. But Brown reassured me: You don’t need to have a conversation “about the patriarchy” with a 3-year-old. She suggested just slipping in short statements at opportune times. I could have said, for instance, “I bet boys would also like to paint their nails!’”

Plenty of parents, she pointed out, already take little moments to introduce their kids to big concepts—kindness, respect, resilience. Grown-ups can also provide antidotes to harmful marketing messages “in microdoses, to help kids understand the world in which they’re living.”

deebee
reply
Haven't had cable for 2 decades but I happily pay about the same amount of money for 5+ streaming services to keep my kids entertained commercial free
America City, America 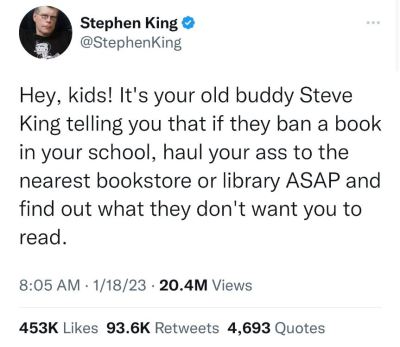 Once the government can demand of a publisher the names of the purchasers of his publications, the free press as we know it disappears. Then the spectre of a government agent will look over the shoulder of everyone who reads. The purchase of a book or pamphlet today may result in a subpoena tomorrow. Fear of criticism goes with every person into the bookstall. The subtle, imponderable pressures of the orthodox lay hold. Some will fear to read what is unpopular, what the powers-that-be dislike. When the light of publicity may reach any student, any teacher, inquiry will be discouraged. The books and pamphlets that are critical of the administration, that preach an unpopular policy in domestic or foreign affairs, that are in disrepute in the orthodox school of thought will be suspect and subject to investigation. The press and its readers will pay a heavy price in harassment. But that will be minor in comparison with the menace of [345 U.S. 41, 58] the shadow which government will cast over literature that does not follow the dominant party line. If the lady from Toledo can be required to disclose what she read yesterday and what she will read tomorrow, fear will take the place of freedom in the libraries, book stores, and homes of the land. Through the harassment of hearings, investigations, reports, and subpoenas, government will hold a club over speech and over the press.
U.S. Supreme Court Justice William O. Douglas,  UNITED STATES v. RUMELY, 345 U.S. 41 (1953)
Read the whole story 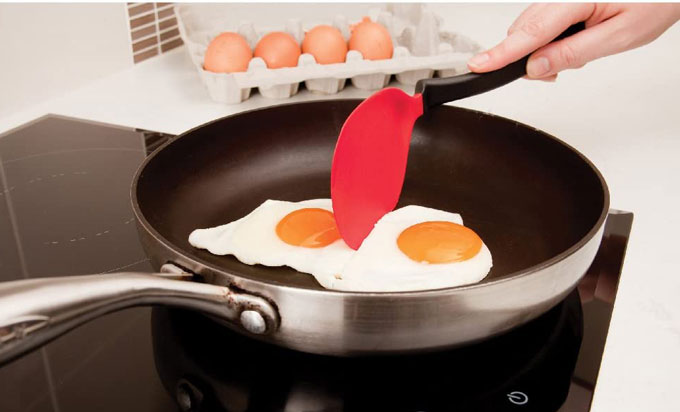 Our family loves to cook, and as an engineer, I’m constantly looking for ways to make things faster and easier in the kitchen. I don’t impress easily, but the Chopula has replaced several other spatulas for us. There are other super-flexible spatulas on the market, but this blade is larger and offset to one side so that you can use it as a blade for chopping (hence the name).

While I’ve used this feature, I think it’s misnamed. The big advantage, in my opinion, is that it combines the large flat surface with a slightly raised lip on one side, which makes it possible to scoop a ton of food to flip. While flipping a single fried egg isn’t that big a deal, the geometry is a massive advantage when trying to flip a large item (like an omelet) but in particular, small items like diced potatoes or whole almonds (we buy raw almonds and roast them in small batches for unbelievably fresh flavor).

The geometry of the spatula also makes it great for scraping the pan and getting every last bit of food. There are 2 issues I see. One is that the tip has deformed over time from use, so I suspect the thinness of the plastic makes it more sensitive to heat. The second is that the design really favors righties, so if you’re left-handed, well, you’re out of luck for now.

All in all, the Chopula is a versatile and useful tool for any kitchen. Scoopula or flipula, you decide.

The Times has another of its talks with idiots, in this case asking a group of Republicans whether the January 6 investigation made any difference them. There are two valuable takeaways here. First, these investigations made no difference at all. That doesn’t mean we shouldn’t do them. It just means that half the nation is completely lost and there’s no getting them back, at least not through investigating the nation’s first serious coup attempt. That’s depressing but it’s real.

Second, Donald Trump is absolutely going to be the Republican nominee in 2024 if he wants it. Even in here, there’s some talk that maybe these voters would prefer someone else, but if it’s Trump they are all-in and most of them are already all-in. DeSantis is the only real contender and even with him, you can easily see that all they really want is slightly more stable Trump. When that doesn’t play out, it’s all Trump all the time.

deebee
reply
The times only goes after yokels instead of a more representative selection made up of yokels, goobers and cunts
America City, America